Looking around at my room, I suddenly gained inspiration for a quick post that I could tap out in the midst of my examinations. Why not take stock of my burgeoning collection of decants and take a look at what I’ve collected since coming to the UK? The majority of the decants were from my own bottles, because it’s too much of a hassle for me to dig through my suitcase every single time I want to wear a perfume. Yep, that’s where I store my bottles because, well, I’ve only got my own room to keep them in! I’ve excluded the decants I made from my own bottles for the purposes of statistical analysis (I use this term very, very lightly), so the figures are of the decants that I’ve either bought, swapped for, or been given by generous members of the fragrance community. I’ve also stipulated rather arbitrarily that decants be at least 4ml in volume, and that large manufactured samples do not count as decants.

Using the very helpful tool also known as Microsoft Excel (I love creating spreadsheets of my perfume collection!), here are some figures:

Favourite Decant: This was a tough one, but I’ll have to go with either EnVoyage Perfumes‘ Zelda or Vero Profumo‘s Rubj. The former came by in a swap with the very lovely Vanessa of Bonkers about Perfume, who has got more swaps under her belt than most (over a 100, according to her!), while the latter was bought from a split organised on a Facebook perfume group.

Most Recent Decants: Amouage‘s Fate Woman and Etat Libre d’Orange‘s Bijou Romantique from a lovely lady I met on a Facebook perfume group.

Last Decant I Won in a Giveaway: Sigili‘s Electra, which was generously given to me by Ines of All I Am – A Redhead after the winner of the original giveaway failed to claim her prize! That was sometime back in November, so I haven’t been lucky since! But it’s great fun taking part in giveaway draws, which is why I like holding them myself!

As you can see, I haven’t really swapped very many decants, although I’d love to do more of that – only problem is getting around the evil entity also known as Royal Mail, which has been known to destroy parcels containing perfume sent overseas, so the majority of my swaps have taken place within the UK. Not that I haven’t done so before – I usually label those as “fountain pens” or “antiques”. So far, so good, and I’m keeping my fingers crossed! 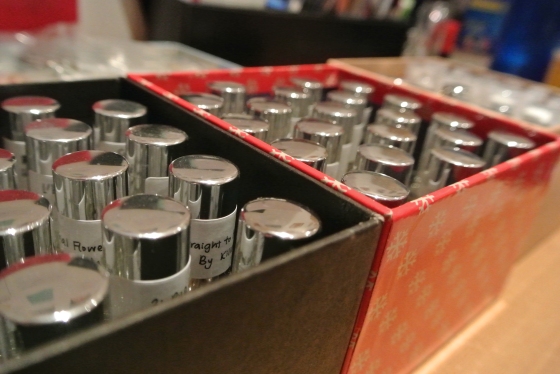 I  must confess to being mildly OCD about the decant atomisers that I use. If possible, I like to use the same one for every decant that I make, although it would be silly of me to expect that others would use the same atomisers as I did, so I compromise and use the same ones for myself, and appreciate the diversity of atomisers that are presented to me! However, when I make decants for others, I usually use a different type of atomiser as it’s much cheaper than the ones I use for myself, so it helps to keep costs lower. I suppose I should probably do a separate post evaluating the various types of atomisers on the market – already I can think of so many criteria, such as whether it’s glass or plastic, the shape, the spray, whether it stands upright without being knocked over easily, how easily it can be stored etc. etc. As you can see from the picture, I store my decants in cardboard boxes that I mostly buy from Paperchase. I like the boxes because they are sturdy and hold up to the rather heavy weight of the decants!

I must say I’ve thoroughly enjoyed this statistical exercise. As it is, I’m currently sitting contentedly on my chair having spritzed on 6 different perfumes that I hadn’t worn in some time. It’s taken far longer than I expected, so it’s back to revision!

How many decants do you own? Are you a fan of buying or swapping decants? Do you have a favourite atomiser? Do you have any interesting anecdotes to share about your decants?

P.S. If you’d like to swap with me, feel free to drop me an email or leave a comment below, and we’ll work something out! 🙂

8 thoughts on “Statistics – Taking Stock of My Perfume Decants”