For those residing in London or those who keep up with perfume news on the blogosphere, the news that the only L’Artisan Parfumeur boutique in the UK (13 Market Building, The Piazza, Covent Garden, London WC2E 8RB) has been replaced by a Penhaligon’s boutique must surely be old news. For those not in the know, you might wish to check out what the good Persolaise has written about the closing of L’Artisan Parfumeur and the opening of the Penhaligon’s boutique.

My intention with this post is not so much to rehash old news, but rather to present some of the thoughts that plagued me when I first found out that L’Artisan Parfumeur would be closing and when I paid a visit to the new Penhaligon’s boutique recently.

I’ve had many fond memories shopping at the L’Artisan Parfumeur boutique in Covent Garden. This was a place where I’d whiled many an afternoon away sniffing the quirky creations, attending a fragrance profiling (is it even possible to profile someone who pretty much wears anything so long as it doesn’t have a metallic bloody note? “Yes, that’s interesting… that too… I like the concept that the perfumer tried to explore but I believe the execution didn’t work out quite so well… etc. etc.” The poor person doing the profiling pretty much ends up ticking every box.), shopping and snagging great deals on Boxing Day (the UK equivalent of Black Friday), and most importantly, chatting about everything under the sun with the affable and friendly staff.

So when I heard that the store would be closing down back in May, I was most definitely filled with a tinge of sadness and disappointment, because the only place one could go to for L’Artisan Parfumeur scents would be in select department stores without a dedicated brand representative and especially because I was sad to say goodbye to the staff. 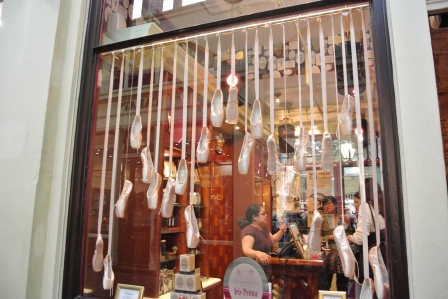 Thankfully, I had a spot of time between appointments on Saturday and so I decided to pay a visit to the boutique, not having had the chance to do so previously due to my being situated in Singapore for summer. From the exterior, things looked very different. What was once a modest display of bottles had been replaced by a cascade of ballerina shoes that actually attracted a long stream of tourists waiting to pose for pictures with them. Also, the lighting in the boutique was noticeably brighter, even from the outside, a far cry from the dim, intimate lighting of the old L’Artisan Parfumeur boutique. As for the interior, Persolaise describes it aptly:

“The decor is completely in keeping with the look of the Christopher Jenner re-vamp of the Regent Street store: lots of illuminated alcoves housing individual bottles; bow-tie motifs hidden in unexpected places; flacon-shaped lights; a mirrored fragrance profiling area; plush, padded seating. The basement has become a Penhaligon’s museum of sorts, featuring old bottles of some of the brand’s best known creations.”

Gone was the mysterious cave-like basement where one could lose oneself in fragrant pursuits. In its place was decor that was plush and purple, prim and proper. The minimalist row of bottles on a stone ledge had been replaced by bottles arranged like a wedding cake on an ornate table. Instead of being able to focus on the olfactive, one was made uncomfortably aware that the place reeked of opulence. I wasn’t too surprised, actually, considering Penhaligon’s efforts to expand and brand itself as quintessentially British. Unfortunately, I was unable to take photographs of the interior, a result of ‘Penhaligon’s policy’. I had previously been able to take photographs in L’Artisan Parfumeur. A small thing, perhaps, but nevertheless one more reason to bemoan the loss of L’Artisan Parfumeur.

On the bright side, I was most delighted to be able to greet and chat with the previous staff from L’Artisan Parfumeur, who had thankfully been retained by Penhaligon’s. Testament to their friendliness and warmth was the familiar hug I received. I mean, how many staff in perfume boutiques or department stores actually offer a friendly hug, much less even a smile? I was, without doubt, immensely glad at meeting them.

Their honest reply was that regular customers prefer going to the flagship boutique along Wellington Street, with some even chancing upon the boutique in the Covent Garden Piazza, asking if the flagship boutique was still around, and then promptly proceeding there without bothering with the boutique they were already at. The reason Penhaligon’s replaced L’Artisan Parfumeur at this location was purely business. Given the tourist crowds that thronged the Covent Garden Market, something that was marketed as BRITISH would make the perfect souvenir. And indeed, as the staff shared, they were seeing a lot more business as a Penhaligon’s boutique than as a L’Artisan Parfumeur boutique. From my short time in the boutique, my empirical observations also suggested this to be true – the boutique was far more crowded than it had previously been, with the bulk of them being tourists (some were from China, another from Miami etc.). While I don’t fault the parent company of the two fragrance lines for making this decision (information derived from this Wikipedia article), I can’t help but lament the loss of a dedicated L’Artisan Parfumeur boutique that was home to some of my precious scented memories. Anglophiles, however, will no doubt celebrate this victory over the francophiles.

Although this has been a rather long and rambling post so far, I couldn’t help but insert a teeny review on the latest release by Penhaligon’s – Iris Prima. Created by Alberto Morillas, Iris Prima opens beautifully with a shot of iris reminiscent of Guerlain’s Après l’Ondée, though without the violet. Unfortunately, after about ten minutes we’re left with an iris-less floral that has a mildly juicy quality. I suspect this has something to do with the hedione that was used, perhaps an attempt to modernise an iris fragrance. Unfortunately, within the hour even this development is gone and what we’re left with is a faint trace of musk that soon vanishes as well. Compared to L’Artisan Parfumeur’s Mon Numéro 8, which was a lipsticky, old school iris, Iris Prima falls flatter than a ballerina who’s just failed to execute a proper pirouette. I guess I’ll have to stick with my bottle of skanky animalic flowers, Hammam Bouquet and my bottle of rotting banana flowers, Amaranthine, for now.