On the evening of 23rd May, I had the immense pleasure of attending a Perfume Lovers London meetup session where we had the chance to chat with perfumer Patricia de Nicolaï. Now, Madame de Nicolaï should come across as no stranger to most who have a vague interest in perfume, given her well-received perfume company, Parfums de Nicolaï, and her esteemed title as the President of the Osmothèque perfume conservatory. She is also known for her perfumer’s “pedigree”, being the great-grand-daughter of Pierre-François Pascal Guerlain and niece of Jean-Jacques Guerlain. As a huge fan of her work, I was as excited as a besotted puppy the entire evening as I listened to the enchanting Madame de Nicolaï speak. Dressed in a purple top and grey pants, Madame de Nicolaï came across as effortless Parisian chic and won over the audience with her honest answers that were peppered with numerous anecdotal details. The evening was hosted by Lila das Gupta, journalist and perfume enthusiast, with the audience piping in with questions every here and then. I have endeavoured to reproduce the essence of what was spoken and preserve the details to the best of my shorthand recording ability. I have also rearranged some of the material in order to make the flow of the conversation more coherent. Presenting An Evening with Perfumer Patricia de Nicolaï:

I lived in a big house in Paris. My mother wore Shalimar as a signature scent. Every morning at 7am, I could smell her perfume and it would wake me up just like an alarm clock would.

2. At what point did you decide to become a perfumer?

My immediate family wasn’t in the perfume business. I’d initially wanted to be a doctor, but studying medicine took too long, so I studied chemistry instead for two years. I recall being in the library in 1979 searching for schools in France that had a chemistry course. At the back of one of the books I’d borrowed, I came across a chemistry school for perfumers – the Institut Supérieur International du Parfum (ISIP, today ISIPCA) that was founded by none other than my uncle Jean-Jacques Guerlain. When I saw it, I knew that was the school for me!

3. What was the process of becoming a perfumer like?

It was a long learning process. I spent much time getting to know the different departments and finally decided that I wanted to work in the laboratory. In the 80s, it was rare for women to become perfumers – only men were perfumers at that time. I had a summer job with Firmenich and was asked to come back a year later, which got my hopes up, but when I returned a year later [after graduating] the chief perfumer told me that he didn’t want a female perfumer. The thought at the time was that women, especially in the bourgeoisie, shouldn’t have to work.

. I heard you worked on Trésor while with Quest (now Givaudan)?

Yes, I’d created a chypre for Lancôme but they wanted a huge floral instead. But I kept the chypre and it’s now Odalisque in the Parfums de Nicolai range.

4. Tell us more about how you got around to starting your own company.

In 1985, my husband suggested that I start my own perfume company. At that time I had to take care of my children. My husband told me that if I stopped working in the perfume industry I would never be able to come back to it. Working for other companies was not an option because there is not enough freedom for the perfumer, who is under the whims of the marketing team. There is competition not just within the company but outside as well. So my husband told me that if I made the perfumes, he would settle the rest of the business. [cue collective sighs of admiration from the audience].

At that time, not many people cared about who the perfumer was. I think this is nonsense. With paintings or music records, we all know who created them, but this didn’t use to be the case with perfumes.

5. The perfumes in the Parfums de Nicolaï range are very affordable. Why did you decide on such a pricing strategy?

There were very few niche brands at that time. My perfumes couldn’t be too expensive nor too cheap. Plus I didn’t have to spend on advertising. So I decided that this was the best ration between quality and price – my perfumes needed to sell in order to exist on the market!

6. What’s the difference between a good and a great perfume?

A great perfume has to be attractive and easily recognisable.

7. Tell us more about your family. Will any of your children take over your business in future?

My daughter studies economics, which is related to marketing. However, she doesn’t like perfumes and “gets the flu” every time she smells perfumes, so I don’t think she will be a perfumer, but she can help out with the business side. My son studied in a business school in Paris and has since worked for L’Oreal and Givenchy. Perhaps he will take over the business.

8. What is it like being president of the Osmothèque?

In 2001 I was part of the technical committee of the Société Française des Parfumeurs which had the task of classifying new launches. That was how I came to know Jean Kerléo [founder of the Osmothèque]. In 2008, I was asked to take over as president of the Osmothèque and well, I said yes. Perfumers tend to stay alone in their labs, but I found it interesting to speak about my job in public. My role as president of the Osmothèque is nearly a part-time job. The best part of the job is that I am a keeper of a collection and repository of fragrances that shaped trends in the perfume industry. A new perfume today is a forgotten perfume tomorrow. Part of the job involves asking companies and perfumers for the original formulas of certain fragrances and replicating these fragrances. These perfumes are kept in the best conditions to slow down the rate of spoilage. We keep the perfumes in the Osmothèque at 12 degrees celsius under low light conditions and use argon, an inert gas, to prevent the perfume from interacting with oxygen.

9. Tell us more about your fragrances.

No. 1 Intense is the most expensive to produce and is a study on white florals – tuberose, jasmine and many others. It is elegant but not overwhelming.

New York has spicy notes, pepper, nutmeg, cumin, vetiver, oakmoss, patchouli, oppoponax, and vanilla. [Someone in the audience mentioned that it smelt like a male Shalimar.] Why the name? Well New York, is a place where my younger sister has lived for more than 20 years. It is sad to have my sister so far; being separated from her inspired me to name the perfume after the place she was living, although I’m pretty sure the actual city doesn’t smell like this!

Vie de Chateau means living the high life, or La Dolce Vita. I’d initially created this one for a castle in Cheverny and created it for my friend, Prince Sigalas, who wanted a perfume he could sell there. It has lots of oakmoss and is fruity with peach and dry hay.

As the evening drew to a close, yours truly managed to sneak in a final question that many people in the room were dying to ask (or so I imagine):

10. What is the latest fragrance project you’ve got up your sleeve?

I’m glad you asked! I never have enough people to do consumer testing with. I brought my latest project along with me today, but it is not yet finished.

What it smells like: sweet, slightly candy-like, with faint hints of Thierry Mugler Angel (oh dear). It was also anisic with hints of cigars and tobacco leaves. Can’t wait to find out what the final version smells like!

So there you have it, An Evening with Perfumer Patricia de Nicolaï. What do you think of her? How do you find the perfumes in her range? Personally, I’m a huge fan of both the person and the perfumes. Madame de Nicolaï came across as very down-to-earth and forthcoming. Regarding the Parfums de Nicolaï range, if you are a fan of elegant yet easy-to-wear perfumes done in the classical french style of perfumery, then this range is a must try. For me, each perfume is imbued with warmth and is extremely well-blended, with no sharp edges. Try it, and let me know what you think. 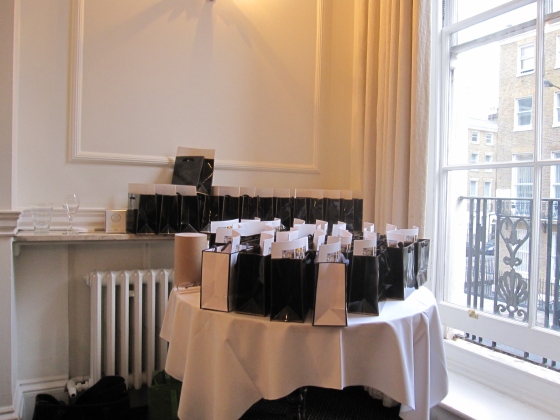 The Parfums de Nicolaï shop can be found at: 101 a Fulham Road London SW3 6RH. It is open from Monday to Saturday from 10.30am – 1pm and 1.30pm – 7pm. Be warned, however, that the shop is so tiny that it’s really easy to miss! Best to ask the shops in the area for directions if you ever get lost.

10 thoughts on “An Evening With Perfumer Patricia de Nicolaï”